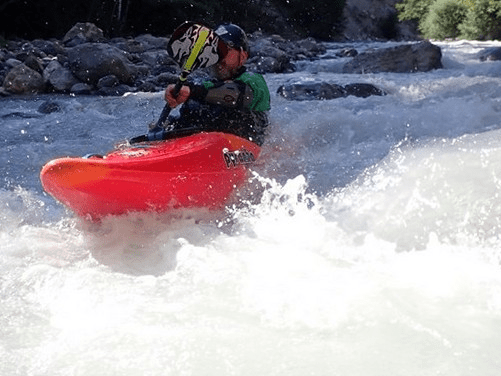 Whilst the rest of the group paddled the Durance down to Saint Clement, Stu and I decided to run the upper Gyronde from the barrage which is not far below where the Gyr and Onde meet to create the Gyronde.

We set off from the camp around 2pm hoping that the river would be as full as it had been a few days earlier, but we drove up we started to get glimpses of the upper section it soon became apparent that the river was extremely low, too low to paddle. We inspected the get in and both decided that it wasn’t worth it. So, we

decided to go and look at the Gyr.

The Gyr is a glacial-fed river that is steep and very fast. There was plenty of water in the Gyr which meant most of the water from the Gyr was being diverted away from the Gyronde into the dam and the only water flowing down the Gyronde was from the Onde and that’s why it was so low.

Both the get in and get out of the Gyr look fast and pretty easy but it’s the middle section of the run that is the steepest and most committing, Stu and I deliberated whether to put on but decided against it and decided to come back down and play on the Slalom course.

On the way back down, we scouted the Grade 6 section that separates the upper and lower Gyronde. We also looked at the Grade 4 section directly below it. The grade 4 section is situated in a beautiful steep sided gorge which can be viewed from the roadside just across from a Renault garage. Even though it was low the steep section of river look very appealing, the sunlight was reflecting off the water as it cascaded in shoots over and between the granite boulders, so we decided to do the run even though there was plenty of pin potential due to the low flows.

We kitted up and got on the river, it was low, but we started to pick our way down choosing our own lines between the boulders and trying to avoid the small, submerged rocks that send you off course and put you where you don’t want to be.

Due to the pin potential on the run, we left plenty of space between us so we wouldn’t pile into each other if one of us got pinned. Not long after the start where the run is steepest, I flared off a boulder and attempted to go between two other boulders, unfortunately the kayak was slightly wider than the gap and I got stuck fast. With no chance of escape whilst sitting in my kayak there was no option but to pull my deck and step out of the kayak onto the larger downriver boulder. I attached my sling to the rear grab handle and jumped to shore and tried to pull the kayak out but to no avail. I signalled to Stu who came up from where he was eddied out about 20m down river, and we set up a 3 way drag system to get the kayak free. Once we were both in our boats, we continued the run with no other incidents all the way back through the slalom course to the campsite get out.

All in all, a great mini adventure.