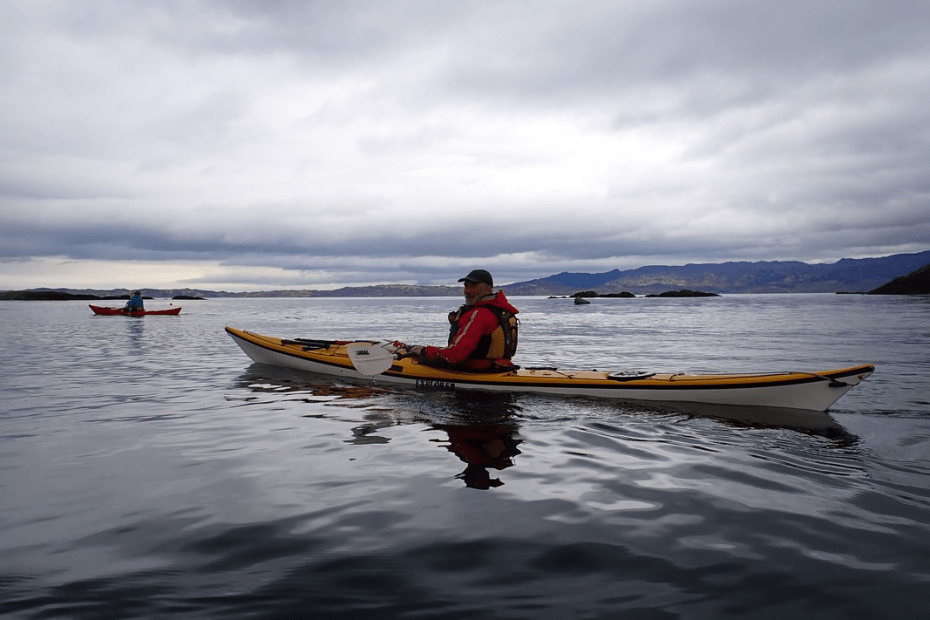 On Easter Sunday, ten members of the group, made their way up the coast to Glenuig to avoid the incoming and unpredictable winds. Here we met up with two highly experienced club members Nicky and Martin, who happened to be camping locally. Ian had promised us a gentle paddle, very much on the same vein of the first day, but much shorter, with the opportunity to see some wildlife. Today was a day to practice skills and explore a different part of the Scottish coastline.

We launched off the jetty into calm still water with a beautiful reflection of the landscape in the sea. We began paddling and very soon started to enjoy the swell, as we made our way along the coast. As we neared Samalaman bay, we were introduced to the thrill of rock hopping as the moving water crashed between the rocks. It was at this point the wind began to get stronger and we continue on, making slow progress close to Rudh’ a Phuill Bhig, before landing on the stunning beach of Smirisary.

We thought we had landed on a tropical island with its turquoise sea and clean white sand. Catriona looked around as she considered this as a future location for some isolated wild camping, whilst Sue shared our newfound secret, with her sister in Canada and the rest of the world through a video call. 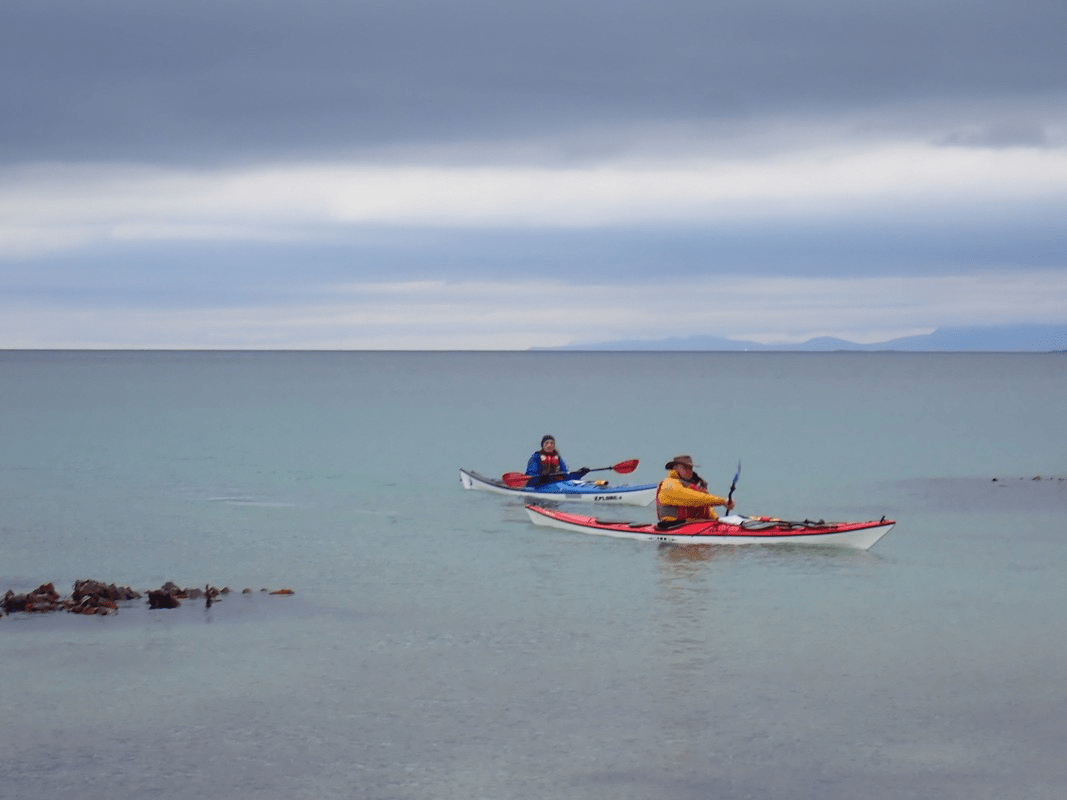 After lunch, we continued to paddle into another bay, where through the crystal clear shallow water we could see the sea bed. Unfortunately, the water was too shallow to allow us to paddle up to see the castle. This was the first time during the weekend that we had encountered any other kayakers.

As the wind began to pick up for our return home, Ian asked us to work our way back with our buddy from the day before. At this point, I should have realised it was not going to be an easy paddle back. Kevin, who was my buddy, thought he was at a paddle fit session as he shouted instructions to paddle faster and even suggested I practice my figure of eight. Having said that, he was incredibly encouraging and gave me a great deal of confidence. 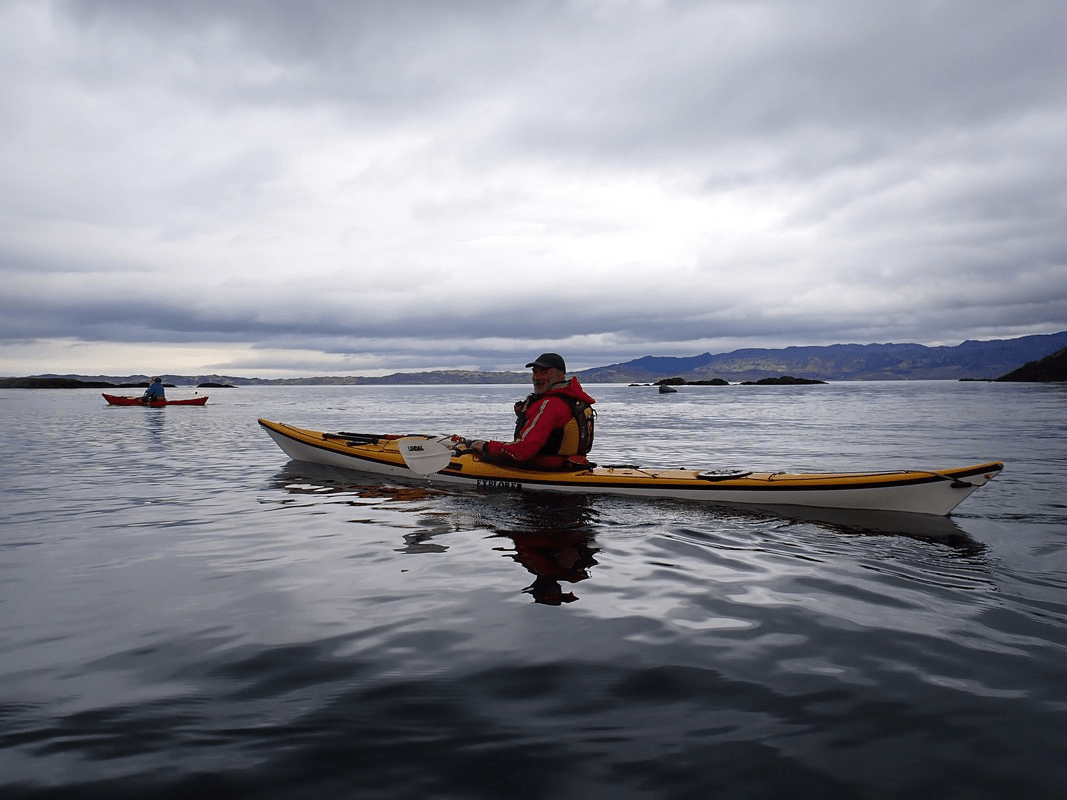 As we battle back against the swell and wind, we were told we were doing well and were working on a three-star standard or above paddle. I’m not sure if this was meant to be reassuring. Everyone in the group worked together to get back, and we were confident in the support of those around us. Even though for some of us it felt really challenging, we always felt secure in the knowledge that we were safe and trusted each and every one of our fellow paddlers.

Sue had found the first day too tame and threatened to leave us to join the white-water crew. This had opened up a challenge to Ian to ensure we had an exciting and testing experience. However, it wasn’t until the end of the paddle that she found her skeg and couldn’t believe the new lease of life she gained as she paddled to shore in a straight line. Stan felt his core muscles had improved and he felt more attuned with his boat, Sheena’s confidence had grown, whilst Cornilla always looked as though she was at one with nature. I spent my time wondering how Joey could keep so close to the land as we paddled back into the headwind. I had the opportunity to put my rock hopping into practice as Nicky suggested I chose the path between two craggy sections, believing that this would give me the rest I needed to take the final push to shore. 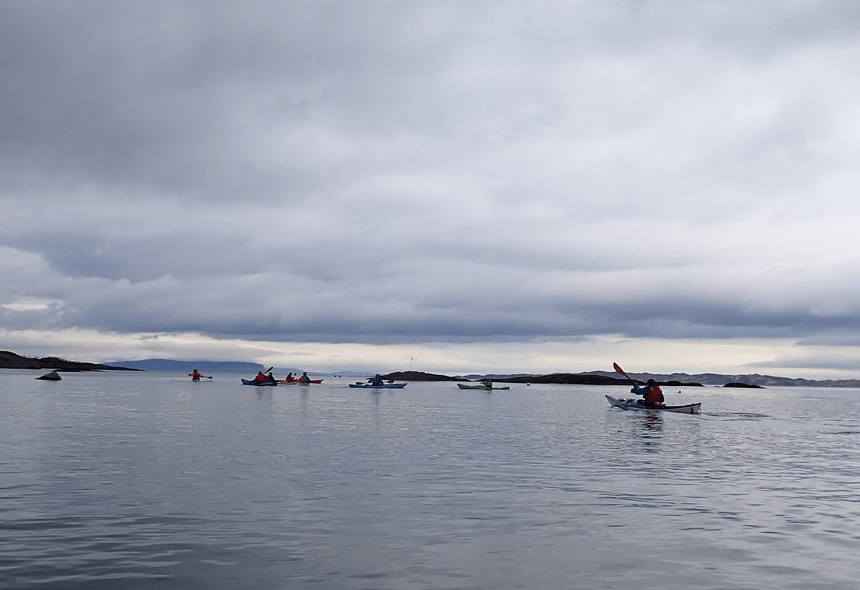 At the end of the paddle, we stood and looked at the sea and couldn’t believe the false impression of the conditions as everything looked so calm. It was a successful paddle with many of the group having only limited experience beyond the docks. Everyone had stayed in their boats and there had been no swimming.

The day ended with a satisfied and tired group meeting up in the Tailrace Inn for a well-deserved meal and a few drinks. Many of the group were excited about the trip to Anglesey in just a few weeks.

This site uses Akismet to reduce spam. Learn how your comment data is processed.